Its been a while since my last post! I've been keeping busy after work gardening, cooking, fermenting, reading, hanging out with my friends and getting up to all sorts of zero waste adventures and events;
It's been a really interesting past few weeks and I have met so many like-minded people and had some wonderful conversations. The BF Callan and I have picked up only a few minor pieces of trash over this time; wrist bands from Splore (the plastic part and our volunteer band as the main one is fabric), 1 straw, a few stickers, medical waste (pill packets, KT tape, a bandage) and some birthday related waste (Callan's, mainly soft plastics). We also had an appliance break at the hands of flatmate (and cluttered cupboards), who very thoughtfully replaced it for us, brand new. This came with some soft plastic and polystyrene, I was in a panic as to what do with this. Thanks to Ecomatters I have already recycled this, they collect these harder to recycle items and send them off to the right places for recycling.

I had first heard about Splore last year when Wash Against Waste put out a call for volunteers to help wash Globlets, reusable cups that are used at the festival. Unfortunately I couldn't attend then as old job was in peak busy season. This year I knew I wanted to be involved and signed myself and Callan up straight away. If you've ever been to a multi day music festival before, or seen photos of the aftermath you may be aware of the huge amounts of waste that generally tend to happen at festivals. So how did we fare, a whole 4 day weekend zero waste? It was surprisingly easy, mainly because Splore was so well prepared.

Splore were really on the ball in educating their crowd before the festival even started, posting heaps about precycling, leave no trace and even a rap video about sustainability. Alongside our camping gear, we packed cooking equipment and our camping utensils, collapsible plate and a large cup. As our fridge and pantry was already packed full of food for the week I figured we may as well take it with us so it doesn't go to waste, and to save some dosh. I packed all of our food into meshbags, cloth bags, containers and reused zip bags (there's a no glass rule) and took a small chilli bin/esky.

Splore were also heavily promoting car pooling and even offered discounts on parking based on how many were in the car. As we were volunteers we did not have to pay for parking or camping,  however I decided we take a carpooler to ease my guilt of driving and provide for some new conversation in our radio-less car. I was stoked when I realised about 10 minutes in to the trip that I picked an awesome carpooler, also volunteering on the zero waste team and as Camp Kaitiaki (Maori word meaning guardian). The Kaitiaki wander around the campsites chatting to campers about sorting their waste and not being messy, they leave them with compostable bags for food scraps and bags for recycling.

As we were volunteers we had arrived a night before the main crowd.  Unfortunately for us a weather bomb hit that night. Our carpooler managed to get their small tent up during a brief non rainy spell, however Callan and I missed our opportunity and after getting soaking wet decided to sleep in the car.  The car, despite being a 28 year old hatchback, proved to be quite comfortable once we set up our camping mats and flattened the seats. The weather cleared up for the rest of the weekend, we pitched our tent in the sun and the rest was a stunning weekend.

Callan and I had the same shifts for the festival, a 6 hour shift each day in a different location within the site. The first night was at the bins next to the main food stalls in the hub of the festival, the second night we were split up at different bins also in the main part of the festival (I was conveniently located next to Wash Against Waste) and our last shift was at a 'waste station' bin among the campers who were sluggishly packing up to leave. The first two nights was mainly food waste (compost) and the odd item in landfill, whereas the last day saw us sorting through several days of trash and recycling.
Splore had 3 waste streams at the festival- Compost, Recycling and Landfill, and a 4th stream at upper camping level for Soft Plastic Recycling. 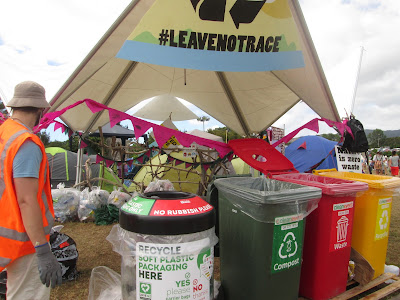 What we learned on the bins: 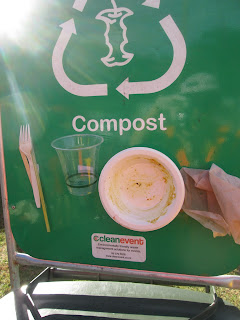 I was really surprised how majority of the crowd didn't know how to compost or recycle properly, and their first instinct was to put their trash in the landfill. Majority of the landfill rubbish came from off-site, on the Sunday the landfill bins were full of glowsticks, wet wipes, un-salvageable costumes, and smaller things such as cigarettes, gum and condoms. We also found a lot of people were wanting to dispose of their once-used or even un-used costumes, thankfully there was collection point for these which were sent to Ecomatters. Callan scored a pair of shoes that had only been worn once and had a bit of mud on them, and we also ended up collecting a decent pile of Globelet cups people didn't want to return. The amount of unopened food was also pretty shocking, food that had spoiled, melted or was slightly overripe- lettuce, chocolate, bananas were the main culprits. We (as well as the other zerowasters) tried to grab most of this before it went in the bins, and I will admit to gorging myself on chocolate biscuits that I wouldn't normally buy due to the copious amounts of plastic (we recycled all of the packaging). We diverted a lot from landfill, most of the waste was compost, followed by recycling, soft plastics then finally landfill, this is a fantastic effort! On the Sunday we were receiving huge bags of unsorted trash, 90% of the crowd were willing to stand their and sort out these large bags with our help. They were all really grateful for our help and hopefully sorting their trash helped them to learn how to properly compost and recycle, as well as showing exactly what they are consuming and disposing of. I believe if there was no-one manning these stations there would have been so much more in the landfill bins. The sorted rubbish actually gets double checked to ensure they are correctly sorted, any unsorted bags get sorted. The compost is then sent off to a large consented composting facility in rural South Auckland.

We purchased a few meals and snacks, all using our own cups, plates, and utensils, and Wash Against Waste washed them for us afterward. Even though all of the packaging was compostable, reusable is the most sustainable option, and I had all of these items conveniently in my bag (my plate is collapsible). 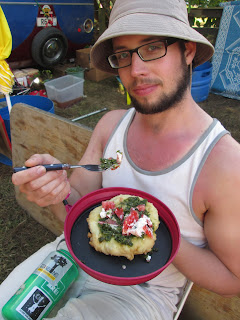 We did the whole weekend on the cheap, spending hardly any money and only buying a beer at the end of the festival after our shift, cashing in the Globlets we rescued.

Would we do it again? Heck yes! We thoroughly enjoyed sorting trash, having conversations about compost and protecting the landfill bin like our lives depended on it. It was like dumpster diving but without the diving.  And we are doing it again- this time next week we will be volunteering at WOMAD on their zero waste team with Beyond the Bin!